Any meat will taste lovely with a herb crust on top, but this is especially true to pork loin. Pork, is a type of meat that takes well on other flavours. Granted, it is not summer any more, but I love to use fresh herbs whenever possible. Today’s herb crust selection is magnificent – tarragon, dill, parsley. They truly make a difference in the crust topping, but you may always substitute with dry herbs if fresh are unavailable. Served with buttery and delicious Hasselback potatoes and fresh green salad your Sunday lunch will be festive meal!

2. First, prepare the hasselback potatoes. Using a small sharp knife, make small slices widthways across the top of each potato, reaching two thirds down, to create a fan effect. Place in a large roasting tray.

3. Mix the oil and herbs together and coat all the potatoes, ensuring the sliced sides face upwards. Roast in the preheated oven for around 20 minutes.

4. Meanwhile, mix together all the ingredients for the herb crust and put them on a large plate. Put the flour on a separate large plate.

5. Heat the butter and some oil in a large frying pan. Sear the pork loin over a high heat until just brown on all sides, then roll lightly in the plate of flour and brush all over with the Dijon mustard. Finally, roll the pork in the herb crust mixture until fully covered.

6. Remove the tray of potatoes from the oven (leaving it on) and brush them with the melted butter. Sprinkle with the garlic, lemon zest and sea salt. Add the herb-crusted pork loin to the tray, nestled among the potatoes and return to the hot oven for around another 30 minutes until the pork is just cooked through and the herb crust is golden. Leave it to rest under a foil cover for 10 minutes before slicing.

7. Depending on their size, the potatoes might need a final 5 minutes to crisp up and become fully soft in the middle, but you can leave these in the oven while the pork is resting. Serve the sliced pork and potatoes with gravy as a roast with a selection of salads. 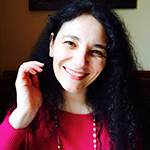 I love my city! Leuven is so beautiful this time o