I have stumbled recently on a recipe, cut off from an old newspaper, written by a lady’s grandmother and used hundreds and hundreds of times through several generations.

The idea sounds nostalgically appealing. How many of our grandmother’s recipes do we realy know and use today?

In a age where ingredients were spears, and there was definitely lack of modern kitchen technology, cooking tasty treats like this one must have been such a feast.

Going back to basics and re-creating ancient recipes warms my heart somehow, and strange to say makes me feel like a woman. One, of the hundreds and thousands and millions throughout the history, who have sat by the stove and feed their dearest ones with simple dishes made with love and care.

{Vanilla and Cinnamon are my late edition to the recipe.} 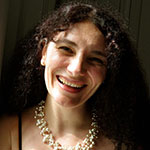 Hi. Welcome to my world of amazing adventures, delicious findings, pursuit of beauty, a touch of femininity and much, much more... Geri

A little pancetta goes a long way to adding richne

Thank you @lestartes.leuven for making our Easter